Some posts on this website may feature affiliate links that, when something is purchased after clicking on it, we may receive a small commission at no additional cost to you.

But as if to test his resolve, professional football teams seemed to step up their recruiting efforts. When the Cleveland Browns’ star wide receiver, Paul Warfield, broke his collarbone in practice, the team contacted John MacArthur to see if he would be interested in signing as a backup. “No,” he told them. “I’m going to seminary.” [1]

Iain H. Murray, Servant of the Word and Flock

During 1959, John learned that he would be able to continue his Bachelor's degree at Pacific College in Los Angeles, and this led to the decision for him to do his two final years at that institution...He was named in an All-American squad as halfback, and was subsequently solicited by several professional teams to determine his interest in a football career. [2]

And in the midst of that athletic career, I reconsidered a childhood dream to be a professional athlete. And I opened myself to that. I was scouted by some professional teams and I talked to them and I went to the Washington Redskins football training camp. And I went through a lot of those kinds of things again, but at that time I really was opened to what God wanted. I considered those things. But when I really knew that God wanted me in the ministry, I was ready. [3]

There have been numerous issues arising concerning many of whom Christians have turned to for leadership. With many great men it has been easy to accept everything they say about themselves as truth. Much of these accounts have been left to being from sources these men have always kept around, resorted or diverted to. As any in these lifestyles and experiences would tell you, it makes you open to critique, scrutiny and observation by all who hear and see you.

Recently, it was brought to public attention that accounts by John MacArthur regarding Martin Luther King, Jr., and the events after his death were questionable regarding their timelines, purpose and root in truth. These claims were examined and continue to be strongly debated by supporters and non-supporters of the proclaimed accounts. Before these events, John MacArthur accounts other stories of his origins, stances and rise to his proclaimed calling.

MacArthur wanted to attend school for athletics, as he says he was offered many scholarships. His father did not want him to do this, and wanted him to attend Bob Jones University. He opted for BJU and attended per his father's wishes, even though there was no athletic program at the school. [4] Despite saying he had an opportunity to play football at USC, he chose to transfer after two years to Los Angeles Pacific College, a small private Christian college of a few hundred students, because he could transfer his credits from the non-accredited university and LAPC was recruiting him strongly for football. According to MacArthur, they had a great basketball and baseball program, but a "pretty extensive football problem." [5]

And so, I ended up that year at Pacific College, playing on their football team, and had a great time and played three seasons there – football, baseball, basketball. And that was the fulfillment of something I’d wanted to do as a kid. [6]

This would be John's junior year at LAPC in 1959, which was the very first year they had a football program. The program struggled financially despite the sacrifices and efforts of Coach Jim Brownfield and the players.

The first practice was held at night on the field of a local playground with no lights, and only six men. Gradually a few more turned out, but at no time did the number swell to more than a dozen or so… Many of the players saved their own money to buy helmets and other necessities. ​[7] 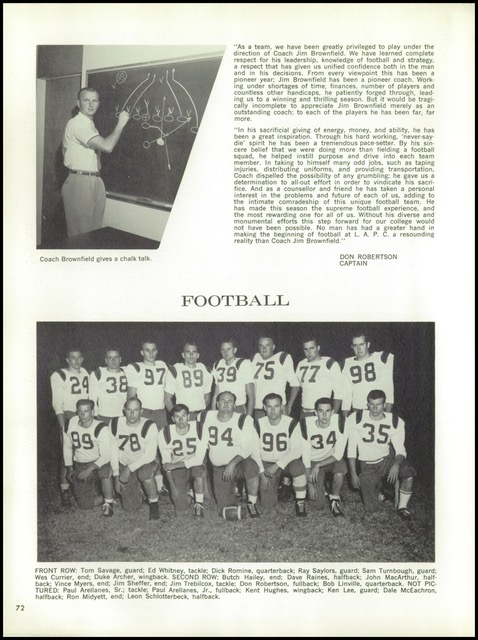 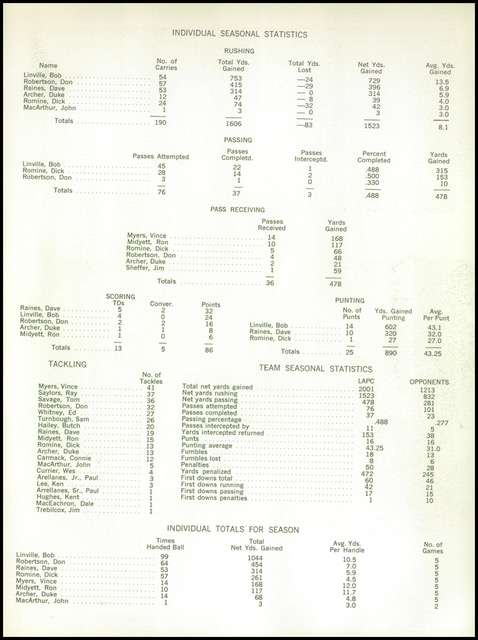 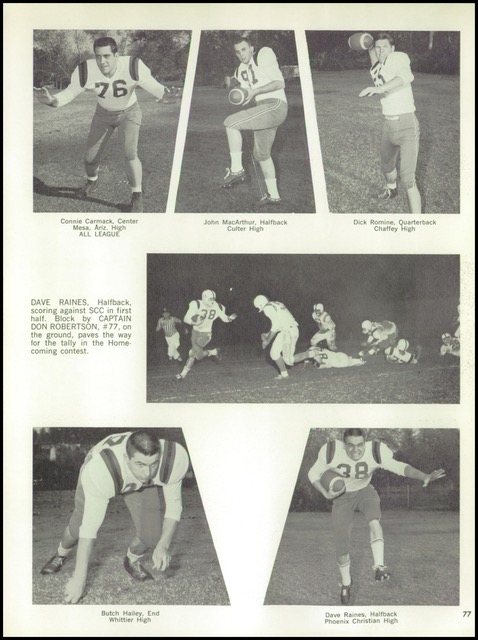 John MacArthur, A Retrospective on 40 Years

I went to a training camp for the Washington Redskins after my junior year of football. And later on I received letters on whether they were going to include me in the draft and all of that. And by the time I graduated I said, “I’m not going to do that. I know I’m not going to do that.” So I said I wouldn’t be interested at all. By then I was fixed on going to seminary.​ [8]

MacArth​ur said he received numerous offers to play football by multiple professional teams, but he refused them even after attending a Kiwanis football luncheon while receiving an award for Player of the Week. He said he helped a quadriplegic cheerleader avoid suicide and accept Christ instead. [9]

So, I told my coach – I have – I still have a stack of letters somewhere in a little scrapbook from the football – pro football teams – and I just said, “You know, tell them I’m not going to – I’m not going to play. I know where God wants me.” [10]

LAPC would continue to struggle financially and then become absorbed into Azusa University. Records would be harder to find regarding anyone attending those early years in the football programs. [11a, 11b]

The timeline of the transition to seminary at Talbot Theological Seminary are seemingly convoluted by several accounts from Phil Johnson, Iain Murray and also John MacArthur in interviews and sermons. Photos and text in Murray’s book place John playing for LAPC in 1962 against California State University. [12] However, Phil Johnson records that he graduated in 1961 with "a major in religion and a double minor in Greek and history." [13]

*Taken from Iain H. Murray's Servant of the Word and Flock

And then I went to seminary. And after my first seminary year at Talbot, I got a call from the Cleveland Browns. They had a great wide receiver named Paul Warfield, who had broke his collarbone in the August practice, and they needed another wide receiver, and my name came up. And I said, “No, I can’t; I’m really – I’m going to stay in seminary and keep doing what I’m doing.” [14]

Warfield runs the best, most precise, most detailed patterns of anyone I know. He means everything to our team. [16]

Paul Warfield was an exemplary athlete. He played for the Ohio State Buckeyes in 1961 as the secondary ball carrier, where he carried 77 times for 420 yards and 5 touchdowns. In 1961, he rushed for 367 yards and 2 touchdowns where his average carries led the Big-Ten. In 1963, he rushed for 260 yards, a touchdown and caught 22 passes for 266 yards with 3 touchdowns. [17]

In 1964, Warfield was a first round 11th pick in the 1964 NFL Draft for the Cleveland Browns. [18] He was originally recruited to play as defensive back, but impressed Coach Blanton Collier to the point that they placed him in the receiver position instead. He caught 52 passes for 920 yards and 9 touchdowns his rookie year. The Browns won the 1964 Championship against the Baltimore Colts and he was invited to his first Pro Bowl. [19]

The Cleveland Browns had their first exhibition game of 1965 on August 6, in the Chicago College All-Star Game, where NFL players are contested against star college athletes. Paul shattered his collarbone in this game, benching him until December 12 at Los Angeles. He suffered a bruise to the collarbone surgery area and was out for the December 19 St. Louis game. He was such a favorite that he was given double coverage which helped them to win the 1964 Championship due to freeing Gary Collins. [21] Even after missing the majority of the season, Warfield returned to the Green Bay game and caught two passes for 30 yards before they lost to the Packers 23-12. He would return in 1966 where he would play better––catching 36 passes at 741 yards and 5 touchdowns. He went on to lead a good NFL career and later would be inducted into the Pro Football Hall of Fame in 1983. [22]

Finding anything about the Browns visiting any universities to find a backup for Warfield has proven elusive to this point. The timelines for MacArthur being considered in recruiting for backing up Warfield, a phenomenal athlete whom the Browns and fans heralded at the time, are even more difficult to find. By this time he would have been far past his first year in seminary when Warfield had become the superstar rookie for the Cleveland Browns in 1964, where they won a championship. Even in 1965, when he sat out due to injury, there were already dependable receivers like Collins, who scored the winning touchdowns for the 1964 Championship.

At this time MacArthur was already fathering kids, being a husband, finishing school, pastoring with his father and participating in speaking engagements abroad. NFL teams do not typically, maybe not even historically, chase after late-in-schooling seminary football students or currently working pastors. Also, timelines from Murray, MacArthur and Johnson bump into each other, much like MLK, Jr.’s assassin’s bathroom accounts and various other civil rights appearances. Warfield’s collarbone injury did not occur after MacArthur's first year of seminary, but two years after he graduated seminary. ​Other issues with MacArthur's statements have caused questions to arise considering his attendance of Washington Redskins training camp. Much of the evidence to help make sense of these newly risen questions regarding his statements relies on the scrapbooks which MacArthur said he needs to find.

Consider supporting The GateKeepers by becoming a Plugged In member, which will get you access to the recording of the Destroy Social Justice Conference featuring speakers such as Pastor Greg Locke, Mychal Massie, Dr Mike Spaulding, Pastor Ken Peters and all of your favorite GK podcasters. You'll also get the recordings from our monthly episode of Connected, a weekly devotional and 30% off of everything in The GK Store. For more information or to join, please visit http://gatekeepersonline.com/pluggedin.

8. A Retrospective on 40 Years https://www.gty.org/library/sermons-library/90-371/a-retrospective-on-40-years-john-macarthur-with-rick-holland